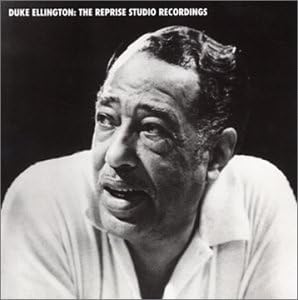 This magnificent five-CD collection accomplishes two things: It chronicles Duke Ellington's overlooked recordings for Frank Sinatra's Reprise label, which were produced from 1962 to 1965, and it refutes the ridiculous claims made by some critics that Ellington lost his musical creativity in his '60s. Sinatra gave Ellington tremendous creative freedom as the label's Aamp;R man, and the maestro responded with some of the most unique and accessible music of his astonishing 50-year career. To paraphrase a famous saying, this set contains something old, something new, something borrowed, with all things blue. The multifaceted aspects of Ellington genius: his highly individual compositional and arranging style, his percussive and pointillistic piano playing, and his incredible ability to recast world music into the jazz idiom, are well represented on these tracks. With his collaborator Billy Strayhorn sharing those aforementioned duties, the nine studio recordings in this collection range from popular to the experimental. Two of them, "Will the Big Bands Ever Come Back?" and "Recollections of the Big Band Era," feature Ellington performing the music of other bandleaders. Fletcher Henderson's hit "Christopher Columbus" is swung by the dancing solos by trumpeter Ray Nance, tenor saxophonist Paul Gonsalves and bassist Ernie Shepard. On Count Basie's "One O' Clock Jump," Erskine Hawkin's "Tuxedo Junction," and Cab Calloway's jive-jam "Minnie the Moocher," the work of trombonists Buster Cooper and Lawrence Brown and torrid, muted, and open performances from Cat Anderson and Cootie Williams recast those dance hits in an Ellingtonian fashion. George Gershwin's "Rhapsody in Blue" is redone into a magnificent 4/4 tune, and Johnny Hodges's velvet alto sax smoothes out Quincy Jones's "The Midnight Sun Will Never Set." Stan Kenton's "Artistry in Rhythm" is textured by Sam Woodyard's sexy shuffle beat, while Ray Nance's down-home trumpet recalls the Rampart Street revelry of Louis Armstrong's "When It's Sleepy Time Down South." Guy Lombardo's grooving "Auld Lang Syne" and Ellington's own "Don't Get Around Much Anymore" will never go out of style.

"Ellington '65" and "Ellington '66" contain pop songs from that rock-dominated era by Henry Mancini, Barbra Streisand, and film composer Dmitri Tiomkin. Nobody else could lay down such deep groove on tunes like "Danke Schoen" and "Blowin' in the Wind" and make them sound as though they were written that way in the first place. Equally impressive are Cootie William's ebullient trumpet lead on the Sinatra standard "Fly Me to the Moon" and the ensemble's take on "I Left My Heart in San Francisco," which transforms the tune into an intricate big-band statement. The other pop-dominated album is "Duke Ellington Plays with the Original Score from Walt Disney's Mary Poppins." Duke's bluesy, Willie Dixon-inspired riff on "A Spoonful of Sugar," the head-bopping waltz of "Chim Chim Cheree," and Jimmy Hamilton's ornithological clarinet flights on "Feed the Birds" are tempoed testimonials to Ellington's ability to elevate any material to fine art.

Those "pop" albums aside, the most impressive sides of this collection are Ellington's wide-ranging concept albums. "The Symphonic Ellington" is rare project featuring Duke with classical musicians from European orchestras. Two of Ellington's early extended works are performed. "Night Creature," a three-part composition commissioned for the Symphony of the Air in 1955, is sonically signatured by outstanding performances from Ellington, Nance, and Hodges. The 14-minute "Harlem" reveals Ellington's incredible ability to translate human experience into music. While Ellington's "Non-Violent Integration" is less successful than the other performances, the moving, midtempo, "La Scala, She Too Pretty to Be Blue"--written a couple of hours before it was recorded--represents the best marriage of European and African-American classical forms. On "The Jazz Violin Sessions," a Paris combo date featuring violinist Stephane Grappelli, Svend Asmussen, and Ray Nance, Duke naturalizes that instrument into a distinct American voice. Strayhorn's evocative "Day Dream," Ellington's "In a Sentimental Mood," and the finger-popping "Tricky's Licks" are proof of the violins new, down-home citizenship.

Anyone who could manipulate time like Ellington would have no problem recording "Concert in the Virgin Islands" before his arrival there for the performance. Nevertheless, it contains some spirited renditions of the Ellington-Strayhorn songbook. The beautiful ballad "Daydream" showcases Paul Gonsalves's heart-tugging, Ben Webster-derived solo. Mercer Ellington's rocking "Things Ain't What They Used to Be" and the slinky, "Big Fat Alice's Blues" spotlight Johnny Hodges's spry, articulate alto tones. Tunes like "Island Virgin" and "Virgin Jungle" import West Indian rhythms into stateside swing with ease.

The sessions that produced the groundbreaking LP Afro-Bossa are the most incredible tracks in the collection. Two piano trios, "Resume #1" and "Resume #2"--commercially released for the time--are brilliant, syncopated summations of the sessions. A gem among these priceless artistic jewels bestowed to us by genius of Duke Ellington. --Eugene Holley Jr.